Skerries Coast Guard can trace its origins back to 1821/1822 with the formation of the Coastguard Service in Ireland. The Coastguard was formed by the amalgamation of three existing services set up primarily to prevent smuggling:

The initial establishment of Coastguard stations in Ireland was overseen by James Dumbrain, Comptroller General of the Irish Preventative Water Guard. Skerries Coastguard was one of only five stations initially established in the Dublin area in 1821. The nearest station to the South was located at Rush, (overlooking the harbour) and to the North at Nannywater (near Laytown). 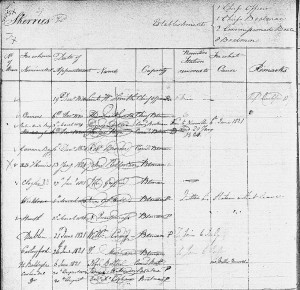 The original Skerries Coastguard station was sited at Red Island, near to where the Sea Memorial Pole is now located.

The Skerries station was manned with a crew of 12, comprised of the following:

Lieut. William Smith is listed as the first Chief Officer, appointed 19th December 1820. The extract from the book of establishment [above right] lists the names of the initial crew and date of appointment. When a crewman left the station, their name was loosely crossed out on the establishment book – hence the scribbles.

The only four survivors of the lifeboat crew were Coastguard boatmen, each of these were later awarded Tayleur Fund medals for their brave actions on that fateful night. Three were boatmen with Skerries Coastguard: Robert Ellison, Thomas Woodley and William Scantlebury. The fourth recipient was Lot Syme, boatman with Balbriggan Coastguard. Later that same year, Lot Syme and Thomas Woodley both received promotions in the Coastguard service;

Mr Lot Syme, one of the four coastguards saved of the crew of the Skerries Lifeboat, whose name has been so prominently mentioned in connection with the disastrous event, on the night of the wreck of the Sarah of Runcorn, has just been promoted to the rank of chief-boatman-in-charge to the Castletown [coast guard] station, Co Cork. Mr Thmoas Woodley, of Skerries, one of the coxswains in charge of the lifeboat, and who also fortunately escaped being drowned on that melancholy occasion, has succeeded Mr Syme in Balbriggan. Mr Syme is a native of Brinny near Bandon.”

In 1878: Thomas Elmore is appointed Chief Officer of the Coastguard station at Skerries.

1921/22 – War of Independence & Irish Free State
In the war of independence many of the Coastguard stations were burned to the ground by Irish Volunteers, having being declared legitimate targets by the Irish Republican Army. This followed a similar fate of the Royal Irish Constabulary (RIC) barracks in the area at the time. The Skerries Coastguard station was recorded as being destroyed in a fire on Saturday 18th June 1921, along with other nearby stations in Loughshinny, Rush and Rogerstown.

“BURNED BY ARMED MEN
FOUR COASTGUARD STATIONS DESTROYED
At two o’clock on Saturday morning the Coastguard Stations at Skerries, Loughshinney, Rush, and Rogerstown, all in County Dublin, were burned to the ground by unknown men. The same procedure appears to have been adopted by the raiders in all cases.

Marching silently up to the different stations, each of which was occupied by a few men only, the raiders ordered the coastguards and their families outside, and then, sprinkling petrol over the house, set them on fire. At one station, ten bicycles were carried away. In some cases very little property was saved by the coastguards.”

In 1923, with the formation of the Irish Free State, the Coast Lifesaving Service (CLSS)
was established. The formal date of re-establishment of the Skerries station was 4th July 1923.  Skerries was assigned station number 3 of the Eastern District. Two other CLSS stations were sited to the North: at Greenore and Clogher Head, Co Louth. To the South the nearest station was at Dun Laoghaire.

The Coast
Lifesaving Service was placed under the control of the Board of Trade and its role restricted to the following duties:

The local contractor for Horses is listed as Mr John Seaver, whereby horses would be used to draw the Rocket Life Saving Apparatus Cart to the scene of a shipwreck. Interestingly, Mr John Kelly was also listed as the No.1 man in February 1915. Much of the 1923 crew would have previously served with the Coast Guard at Skerries prior to the CLSS establishment.

Methods of tasking the crew
The method of calling the Life Saving Company (team) together for the purpose of affording assistance to vessels in distress consisted of the No.1 Man firing one Maroon rocket signal. This emitted a very loud signal that would have reverberated across the town. This signal also served the purpose of indicating to a vessel in distress or to any Lighthouse or Lightvessel signalling for assistance that the distress message is received and is being attended to.

Having deployed the Maroon signal, the actions of the No.1 Man were prescribed as follows:

On 19th September 1934 James Mansfiled (a Painter of “Altona” 86 Strand Street, Skerries) joins the Skerries Coast Guard team. James would later become the No. 1 Man (Chief Officer) during much of the late 1930s and 1940s, assisted by No.2 Man Christopher Shiels. 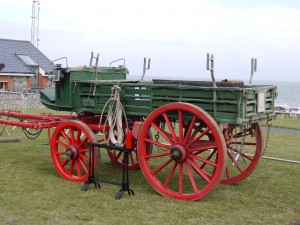 The Unit was equipped with a horse drawn cart. This was used to carry the team and the Life Saving Appartus equipment to the scene of an incident. The cart could also be drawn short distances by hand if required. The original Skerries Coast Guard rocket cart is currently on loan to Fingal County Council and is on public display at Newbridge House & Farm, Donabate, Co Dublin.

The Life Saving Apparatus kit comprised a defined list of equipment. The image below is a copy of “list of stores to be kept in Cart” notice issued by the Board of Trade, November 1877. This notice listed all the items carried in the Cart and was to be affixed to the outside of the Tail Board. This served as a useful reference list for the team. The image below is taken from the list affixed to the former Skerries Coast Guard Cart. Some of the items carried included: Signal flags, heaving canes, spades, port fires and tally boards. 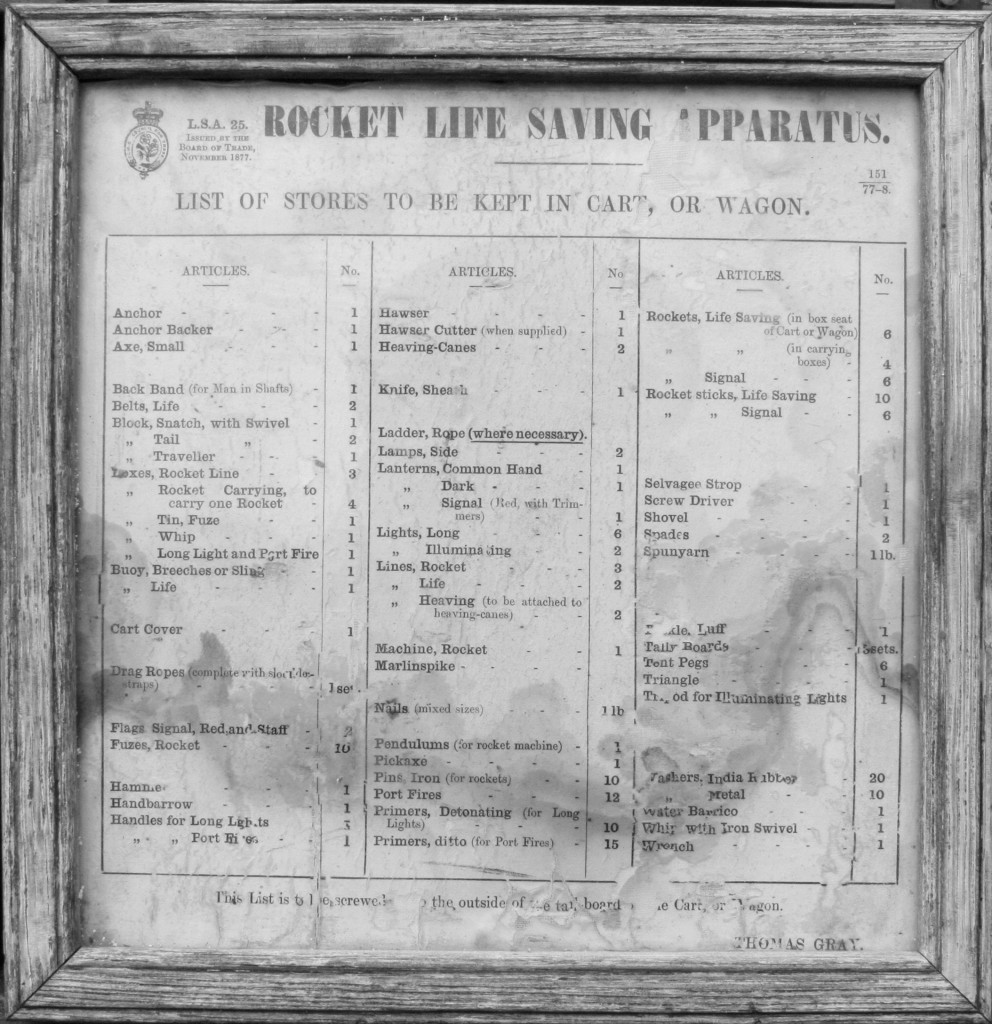 List of stores to be kept in Life Saving Appartus Cart, Skerries Coastguard, 1877

In operating the Rocket Apparatus, each man was assigned a numbered armband. Each number signified a particular role to be carried out in the rescue drill. In the crew picture below from a training exercise at Red Island, Skerries 1958, each man can be seen wearing their numbered armband, usually on the left arm. The rocket apparatus kit was stored in several heavy wooden crates with rope handles, one of which can be seen at the front of the photo. The front of the rocket appartus cart is also visible in the background of the photo below. 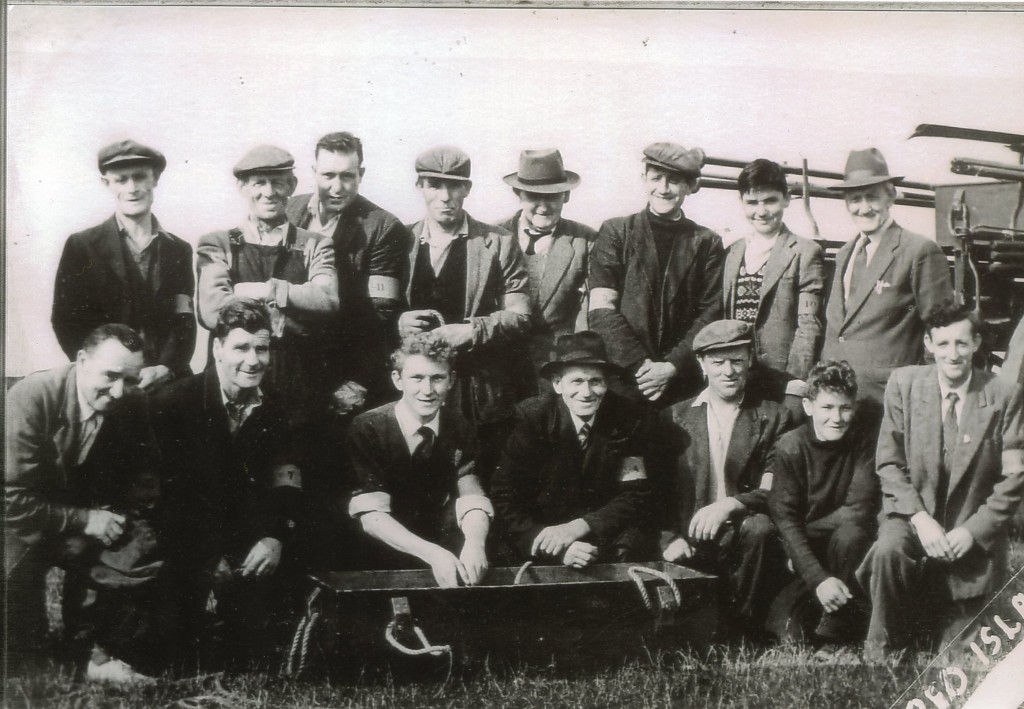 Like many other CCLS teams around the coast, the Skerries crew carried out exercise drills on the use of the Rocket Apparatus kit every one to two months. These drills were often carried out nearby at Red Island and overseen by the CCLS District Officer from Dublin. Informal competitions would be held among the crew at each drill on key skills; throwing the heaving cane, semaphore, Morse code, with small cash prizes awarded by the District Officer for the winners of each skill.

The current Skerries Coast Guard station at Red Island was constructed in the 1960’s and remains in operational use to this day. A local builder from Red Island, Skerries won the public tender to build the station, constructed from concrete blocks and pre-cast concrete sections. Additional modernization of the building has continued to the present day but the original structure is largely unchanged.

1991 change of service name to Irish Marine Emergency Service (IMES). As part of a nationwide service upgrade, the first motor vehicle is assigned to the Skerries station. The Ford Transit van could carry 3 crew and was used to transport the full rescue kit to the scene of an incident and significantly reduced incident response times.

2001 change of service name to the Irish Coast Guard (Garda Costa na hEireann) which is still in use today. This is often abbreviated as “IRCG”. The current service logo features an intertwined anchor and harp. Note, the new spelling of Coast Guard as two separate words.

Further enhancements to the Skerries station continued with the provision of the first 4WD (4 wheel drive) emergency vehicle in 2005 (a Toyota Hilux crewcab). A second 4WD vehicle arrived on station in 2015 followed by an All Terrain Vehicle (ATV) Polaris Ranger in 2018.