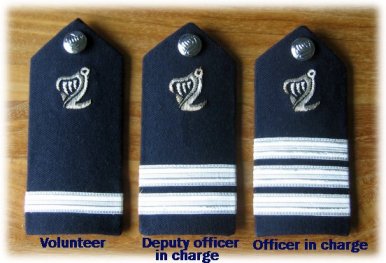 The Coast Guard logo is a combination of a harp and anchor, inspired by the original Water Guard logo from the 19th century.

This uniform is worn on all formal occasions such as parades, funerals, and receptions.

The operational kit is worn during all incidents and training exercises. It consists of a black polo shirt featuring the Coast Guard logo on the front and Irish tricolour on the left upper arm, grey combat trousers, black web belt and black boots.

Details of the operational PPE can be found on our Personal Equipment page.