The Skerries Coast Guard team took part in a scheduled training exercise this morning with the newly launched Dublin based Coast Guard helicopter, EI-ICR. The team were also joined by the neighbouring station of Clogherhead Coast Guard for this first landing of the new Sikorsky S92 at Skerries.

The teams selected and prepared the landing site, this also included the deployment of orange smoke flares. The helicopter departed its base at Dublin airport and within minutes was on scene at the Red Island headland, Skerries shortly after 10am. 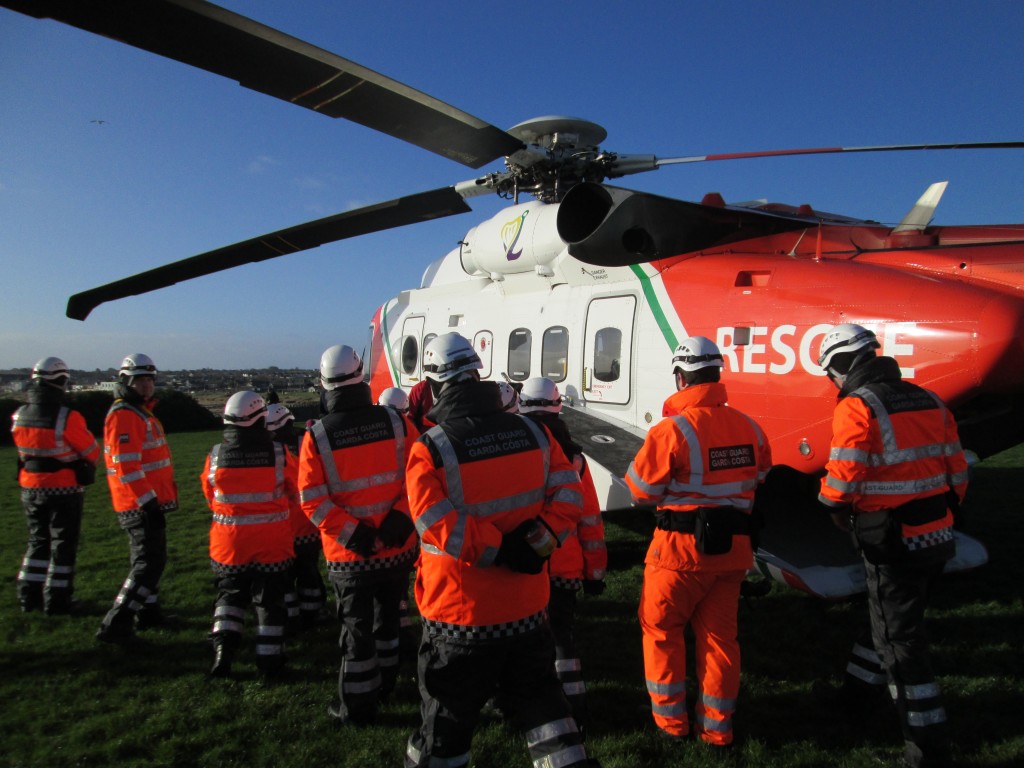 Further photos of the exercise are available in our online gallery. 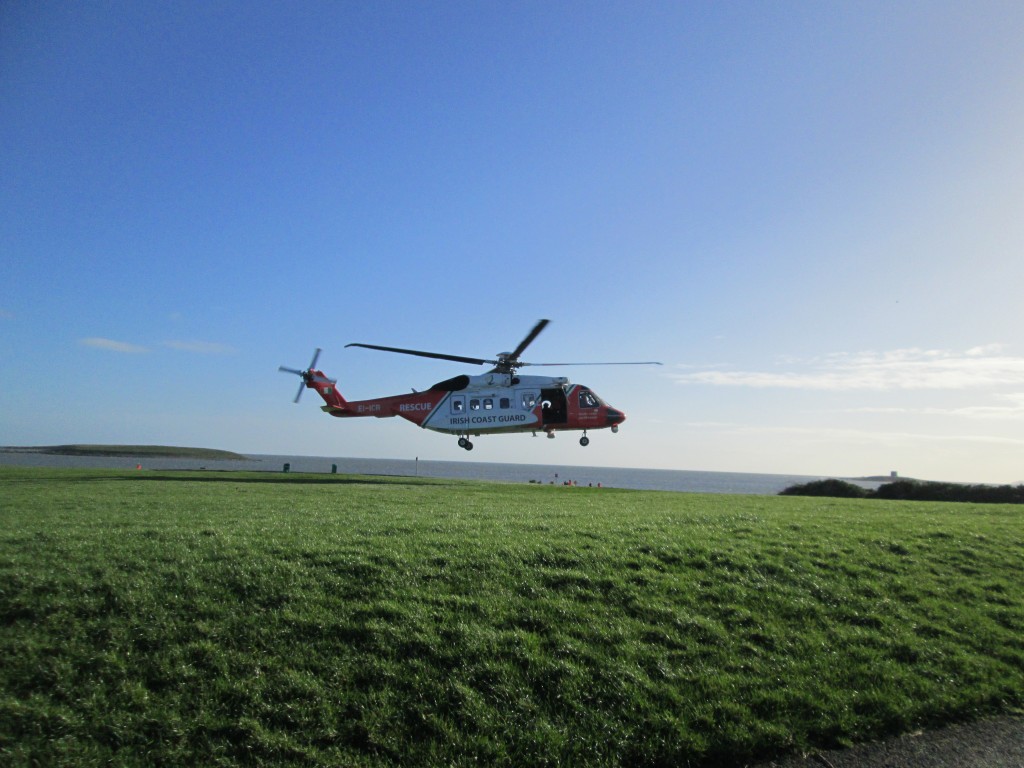 Skerries Coast Guard attended today’s ceremony to mark the official unveiling of the Sea Memorial by President Higgins. A large crowd gathered from early morning at the memorial site at Red Island, Skerries and as the ceremony began at 11:30, crowds lined the barriers, eager to catch a glimpse of the proceedings. Several representatives from other services were present including the Naval Service, the Air Corps, RNLI, Gardai, Civil Defence, and Fire Brigade. The Director of the Irish Coast Guard, Chris Reynolds, also attended the ceremony. 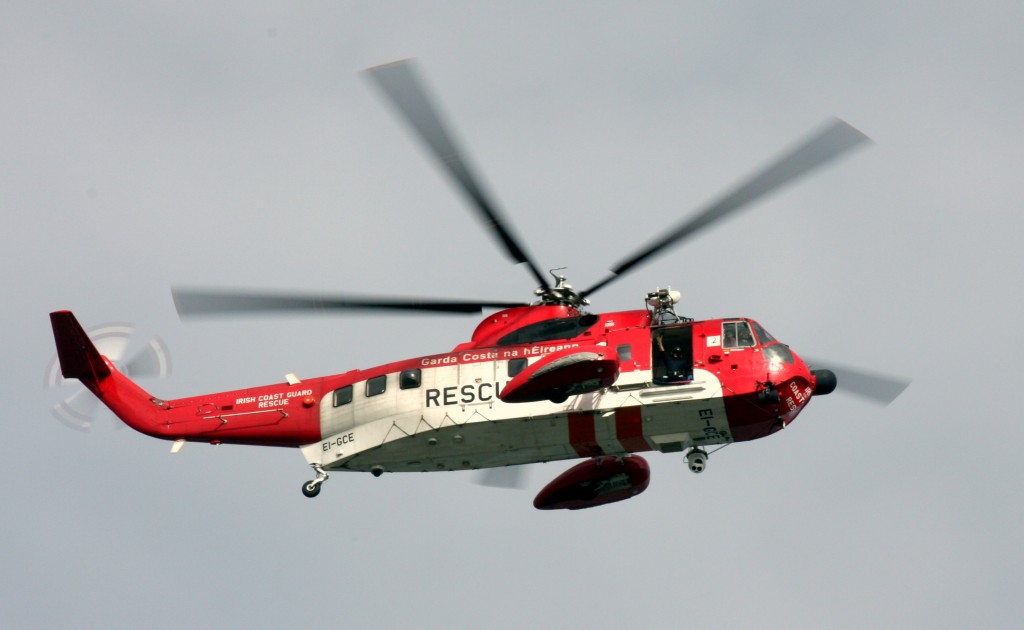 The ceremony began with a dramatic aerial display by the Coast Guard’s Dublin based Sikorsky S61N rescue helicopter.  The Sikorsky helicopter, with its striking red and white markings, swept gracefully across the sky, awakening distant memories of the hundreds of past rescues and searches carried out by the Coast Guard service along the local coastline. Rounding off the aircraft display was an impressive flypast by the Air Corps CASA CN235 Military Patrol Aircraft, another key search and rescue resource. 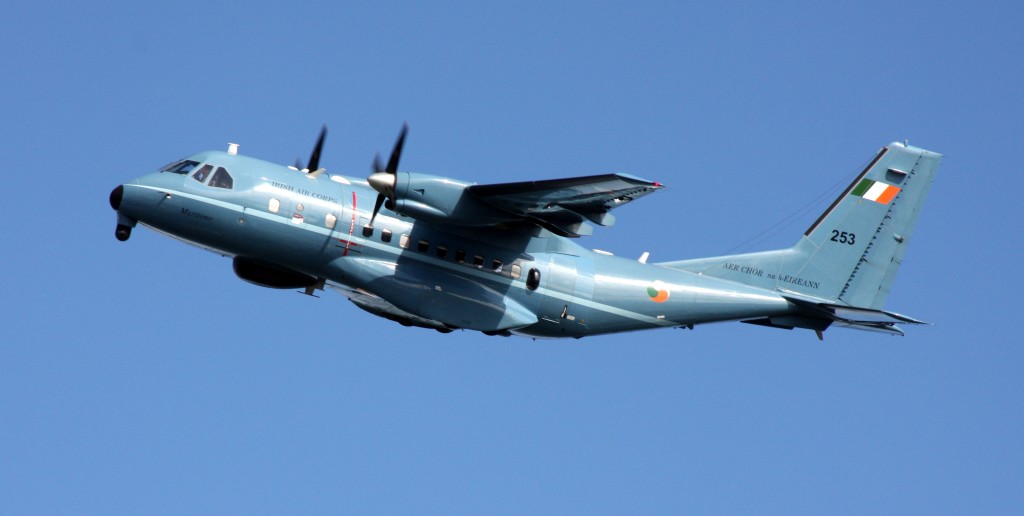 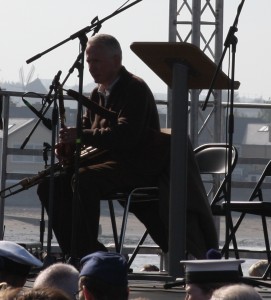 President Higgins was formally welcomed to Skerries by Mayor Dennison and the President then delivered a rousing, memorable speech, including praising the considerable local effort and dedication in bringing the memorial to completion. After officially unveiling the commemorative plaque, President Higgins met with the family members who had lost loved ones to the sea and also the services present. 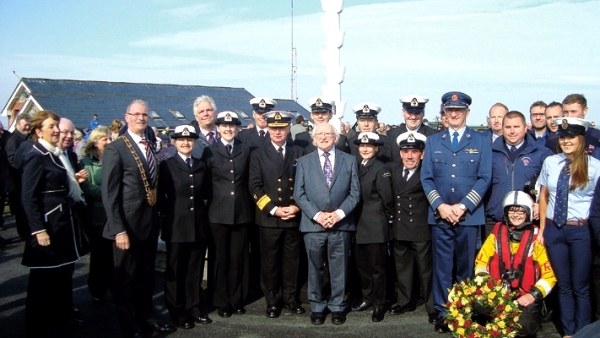 The old Skerries Coast Guard Rocket Cart made a special appearance and was on display all day near the memorial. The cart was formerly used since the 19th century to haul the Appartus rescue equipment to the scene of a shipwreck. The Coast Guard cart was making a historic first return to Skerries town since it was formally decommissioned several decades ago. 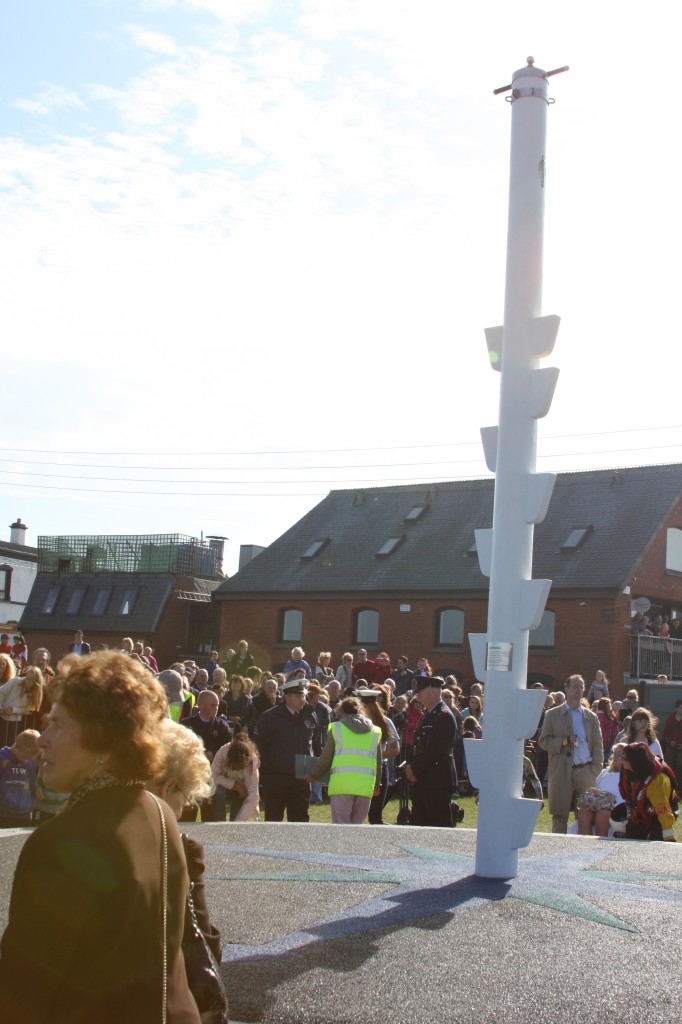 The Coast Guard have a particular interest in the design  of the memorial as it features a former Coast Guard Apparatus Pole as its centrepiece.  The Coast Guard pole featured in the memorial is one of three that used to stand tall on the Red Island headland at Skerries, used for training purposes by the local Coast Guard to simulate a distressed ship’s mast.  In a bygone era, before helicopters, the Breeches Buoy rescue system was the primary land based method used to save stricken sailors from a foundered ship. 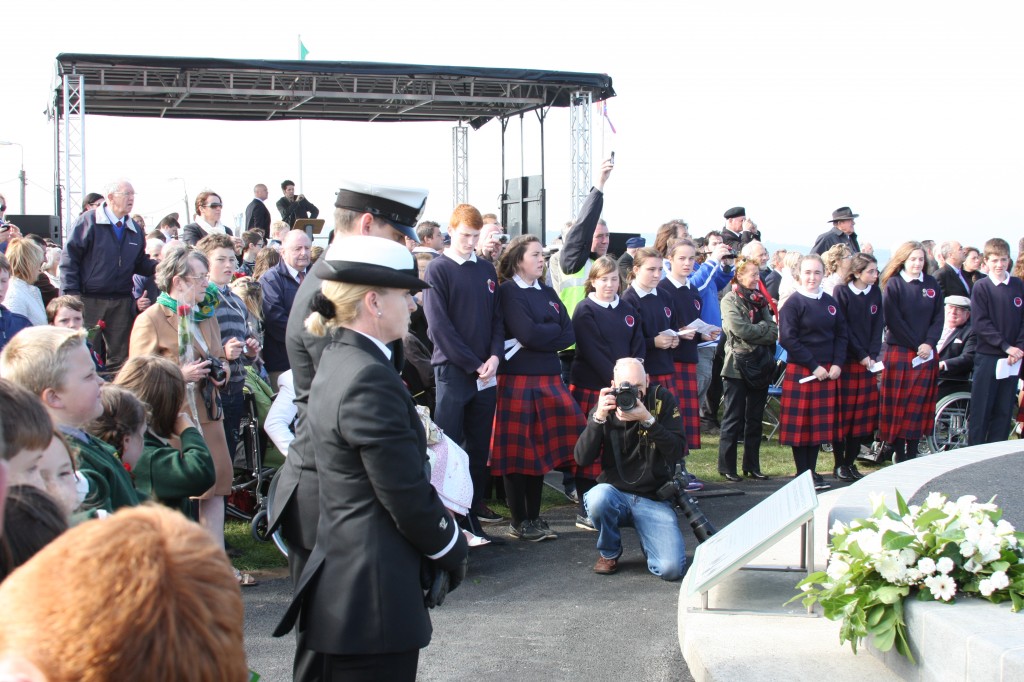 In particular, the Coast Guard remembers the loss of Albert Anning, a fellow Coast Guard stationed at Skerries who was drowned in February 1873 during the attempted rescue of the shipwreck, “Sarah Ann” in Balbriggan. The Sarah Ann was a Runcorn Schooner laden with a 100 Tonne cargo of coal that foundered on the rocky coastline. Albert Anning was assisting with the manning of the RNLI Lifeboat that bravely set out from Skerries that fateful night. Following the Lifeboat’s capsize in the ferocious stormy seas off the Balbriggan shore, Albert tragically drowned along with the six Lifeboat men on board.

The Fingal County Council Events team and Dublin Civil Defence were onsite with their mobile command and control unit.

Skerries Coast Guard’s photos from the event are available in our online gallery.

The ceremony was also reported by the print media including the Irish Times, Irish Independent, Fingal Independent and North County Leader. 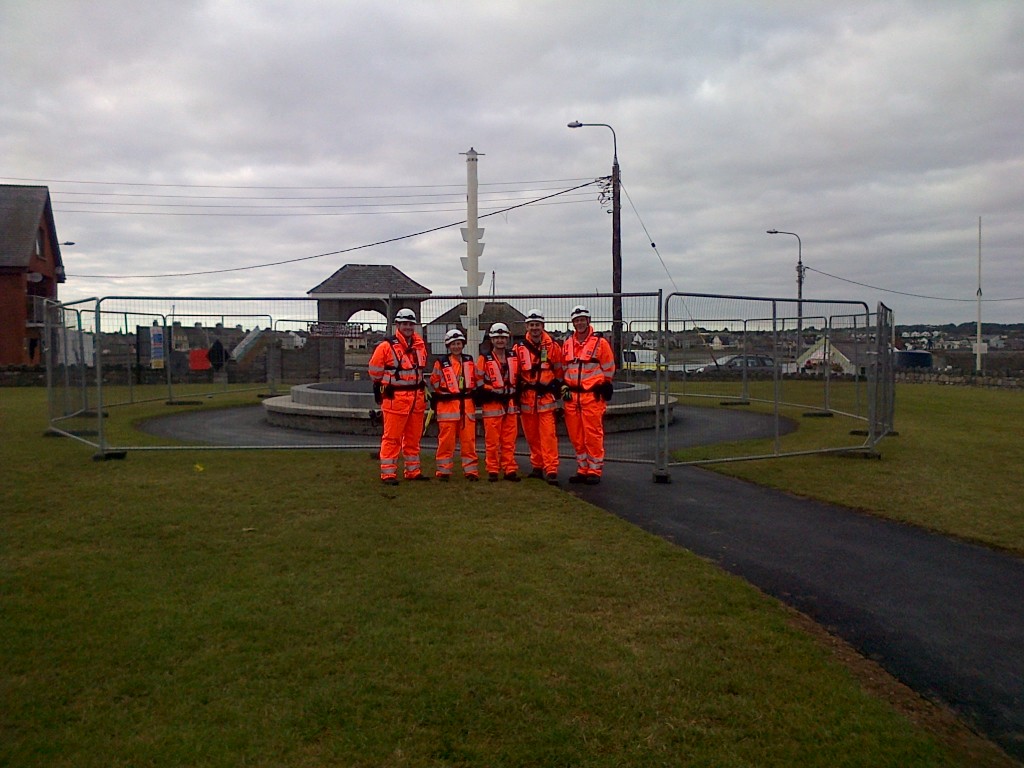 Members of Skerries Coast Guard with the SeaPole under construction at Red Island, Skerries.

The Skerries Coast Guard team will be attending the forthcoming unveiling ceremony of the recently constructed SeaPole Memorial at Red Island, Skerries. The ceremony starts from 11:30, with President Higgins arriving at 12:00 to perform the formal unveiling. Local schoolchildren will also read out the full list of names inscribed on the base of the memorial.  Further commemorations are planned before and after the official unveiling.

The public are advised to travel to the harbour area on foot as traffic restrictions will be in place.

The Irish Coast Guard’s Dublin based Sikorsky helicopter is scheduled to perform a flyby of the ceremony, giving all a chance to see the aircraft in action. The Air Coprs are also being lined up for a dramatic flyby.

Fingers crossed the forecasted Easterly winds are light and the rain stays away.

This morning, the Skerries Coast Guard team provided an escort for the final leg of the arrival of The Pole Sea Memorial to its installation site at Red Island. The memorial will serve to remember all those lost at sea along the nearby coast and from the area. The pole is modelled on the original Coast Guard Breeches Buoy training pole, of which there were three sited on the Red Island headland many years ago.

The completed memorial will include individual plaques dedicated to all those lost at sea along the nearby coast or from the area, and will be unveiled by President Higgins at a public ceremony at Red Island on Sunday 29th September 2013. 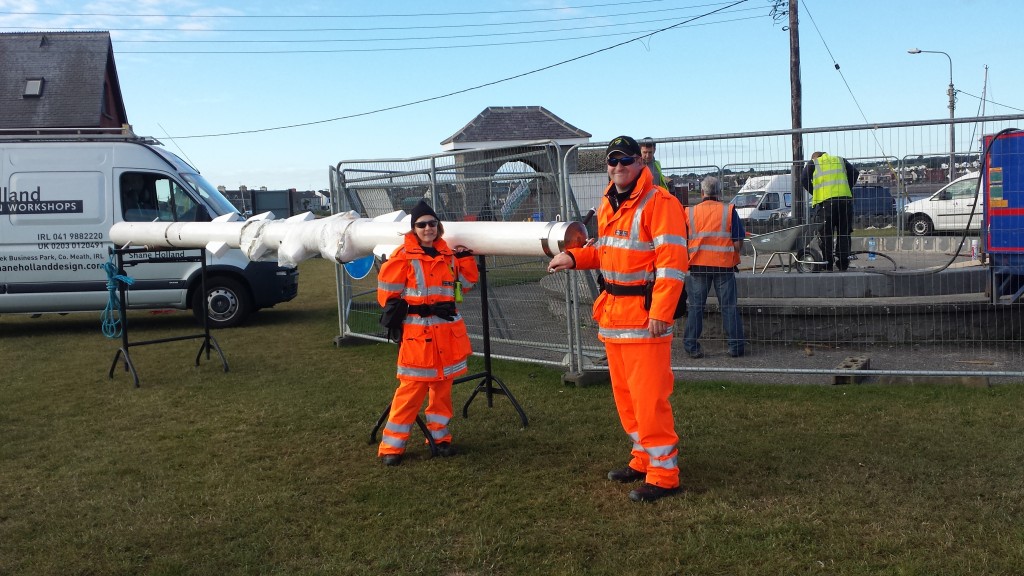