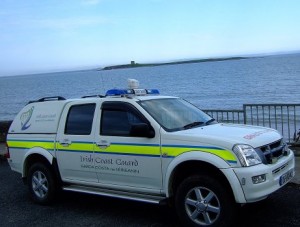 Shortly before 21:00 this evening the Skerries Coast Guard Unit were tasked to investigate a report of persons in difficulty in the water between Shenick Island and the mainland at Skerries. A concerned member of the public had spotted a group of youths in the deep water, making their way in to the shore from Skenick Island.

The Coast Guard team investigated and quickly located the group who had reached the South Strand shoreline. All were ok and not in need of assistance. However, the Coast Guard spotted a small group huddled together on another offshore Island, Colt Island. The Skerries lifeboat was requested to check on this group and all was ok, they were kayakers taking a break on the Island.

No further action was required and the Coast Guard team returned to base.

With the Summer Solstice Spring Tides occuring over the next few days, the low tides in the Skerries area will be unusually low. While Shenick Island may appear inviting for a walk across, the public should be mindful that the tide floods very quickly in the area and they run the risk of being stranded.