Skerries Coast Guard were tasked today to investigate a report of a fishing vessel which had swamped at Skerries harbour. Unfortunately the vessel, which was moored alongside the harbour quay, was swamped by the incoming tide during the night. The Skerries Coast Guard team inspected the harbour area and no pollution was noted. The Coast Guard’s Sikorsky helicopter later performed an aerial observation of the area and nothing further was observed.

Shortly after 21:00 this evening, the Skerries Coast Guard team were tasked to investigate a flare report off the coast of Rush, approximately 4 miles south of Skerries. A flight crew member of a passing passenger jet reported seeing one yellow flare off the Rush coast. The Skerries team carried out a shoreline search of the area with nothing further to report. No further flares were observed or reported.

No further action was required and the Skerries team returned to base.

Remember – if you spot someone in difficulty on the coast, dial 999 or 112 and ask for the COAST GUARD. Do not assume that someone else will make that call. 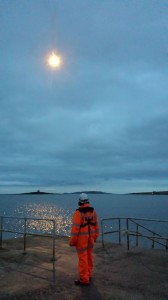