This afternoon, the Skerries Coast Guard team were tasked to investigate a report of a boat in difficulty off the coast of Rush, approximately 5 miles South of Skerries. A concerned member of the public had contacted the Coast Guard’s operation centre on 999 to report a yacht that appeared to be in difficulty near Lambay island. The weather conditions on scene were extremely challenging and the yacht appeared to be having difficulty making headway. Of most concern was its proximity to the rocky shores of Lambay isalnd. The Coast Guard helicopter, Rescue 116 was also tasked from its base at Dublin airport.

Upon arriving at Rush, the Skerries Coast Guard team monitored the yacht and observed that it was successfully making good progress away from the shoreline and no further action was required. Before the Skerries team and Rescue 116 had departed, the Coast Guard’s operations centre received another unrelated report from a member of the public at Rush.

A small boat had been spotted drifting out to sea from Rogerstown estuary. The caller was concerned that there may have been a person on board. The coast Guard helicopter, Rescue 116, quickly located the boat approximately 1 mile West of Lambay island and reported no persons on board. Initial investigations by Rescue 116 suggested that the boat’s mooring rope may have snapped in the rough conditions. Nonetheless, an extensive search of the area was immediately undertaken by Rescue 116 and nothing further was sighted. In the meatnime, the Coast Guard managed to trace the boat’s owner who confirmed that it had broken its moorings and that no persons were on board. No further action was required and the Skerries Coast Guard team returned to base.

Remember – if you spot someone in difficulty, even if you only think they could be in difficulty, call 999 or 112 and ask for the COAST GUARD. Your call could save their life. 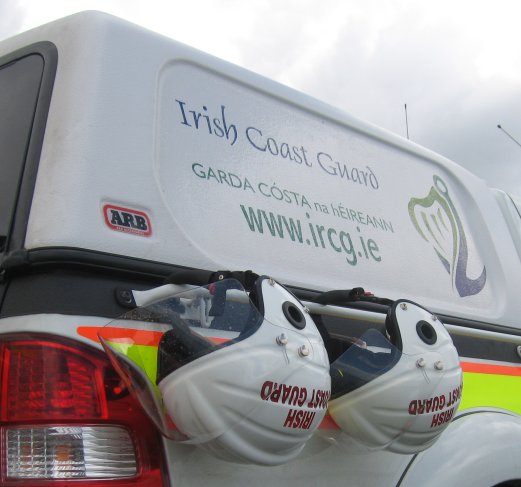 At 20:23 this evening, the Coast Guard’s rescue coordination centre paged the volunteers of Skerries Coast Guard. The Coast Gaurd has received calls from the public that there was a large yacht adrift near Skerries harbour. The Skerries team were assembled and on scene within minutes. At this stage, the 32 foot yacht was already holed and grounded on the rocky shoreline. It appeared that the yacht had come free from its moorings nearby in the harbour area. The owner of the yacht was notified of the incident.

The Skerries team inspected the yacht on a regular basis, monitoring any risks posed to the shoreline and natural environment.

This afternoon, Skerries Coast Guard were tasked by the Coast Guard’s rescue coordination centre to investigate reports of a drifting yacht at Skerries harbour. Several concerned members of the public at the harbour had contacted the Coast Guard to report that the yacht was drifting towards rocks at the shoreline.

The Skerries Coast Guard team arrived on scene within minutes and quickly established that there were no persons on board the yacht and it appeared to have broken free from its moorings nearby. The yacht was later successfully removed from the beach with the assistance of Skerries lifeboat and returned to its moorings. The Skerries Coast Guard team also conducted a full shoreline search to establish that no pollution had occured from the grounded yacht.

Skerries Coast Guard were tasked at 21:00 to assist in the search for a 22′ UK based sailing vessel. The Milford Haven branch of HM Coastguard had become concerned for the vessel, as the last contact they had was one week ago when the vessel was in Carlingford Lough. The skipper’s intention was to sail along the East coast of Ireland and then make a crossing of the Irish sea.

Many of the Coast Guard teams on the East coast of Ireland also assisted with this search.

The Skerries Coast Guard team searched all harbours and inlets within their area from Laytown to Malahide. Conditions on scene were difficult with poor visibility, heavy rain and freshening easterly winds. No vessels matching the description were found and the team were stood down by MRCC.